WAX ON WAX OFF DAY

They are two of the most consequential and intriguing men in Silicon Valley who don’t live there. Hassabis, a co-founder of the mysterious London laboratory DeepMind, had come to Musk’s SpaceX rocket factory, outside Los Angeles, a few years ago. They were in the canteen, talking, as a massive rocket part traversed overhead. Musk explained that his ultimate goal at SpaceX was the most important project in the world: interplanetary colonization.

Hassabis replied that, in fact, he was working on the most important project in the world: developing artificial super-intelligence. Musk countered that this was one reason we needed to colonize Mars—so that we’ll have a bolt-hole if A.I. goes rogue and turns on humanity. Amused, Hassabis said that A.I. would simply follow humans to Mars.

Take Risks Before Life Gets In The Way

*I’m 46 and recently married (again). We don’t have kids and now is the time for me to strike before life gets in the way. What’s your story?

Elway, who majored in economics at Stanford, amassed a fortune with his business ventures outside of football, including selling his six car dealerships to AutoNation for $82.5 million in 1997. He has four upscale restaurants in Colorado that bear his name. He adheres to the same philosophy he did as a player.

“To be great, you’ve got to be good for a long time,” he said. “That’s what great is. That’s always been our philosophy in the car business or the restaurant business. The brand may get them there. It gets us a shot. But it’s how we handle them when they walk through those doors.

“I just wish I had that 25-year-old body,” Elway says. So he engages daily in the endless task of remaining fit. Today’s masochism involved abs work, the monotony of a stair-climb machine, and a final charge on the stationary bike

*Do some ab work, get on that stair climber and stationary bike at the gym today. 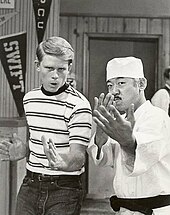 Actor best known as “Mr. Miyagi” in The Karate Kid (1984) and three sequels. Noriyuki “Pat” Morita (1932–2005) was born in Isleton, California, the son of Issei farm workers. Struck by spinal tuberculosis at age two, Morita spent much of his childhood in a body cast in a sanitarium, where a priest gave him the western name “Patrick.” A series of surgeries restored his ability to walk when he was eleven just in time for him to join his family in American concentration camps at Gila River and Tule Lake.

The point of my final project became this: even though my father may have shared some semblance of celebrity or recognition, he, too, will be forgotten. He, too, will fade in the memory of the public.

*Realize that you too will fade in the memory of most people. Live your life knowing this.

“Skateboarding has given me everything I have and created who I am. I understood from an entertainment side, that no one had ever approached the biggest athletic alternative to organized sports as sports entertainment.  No one took the approach of building an entertainment product. That has made the difference in why we are so successful,”

*Take what you love doing the most and create something that no one has ever done with it. This is 365DOLF for me.

It still holds true: If you can make people laugh at Hitler or tyrants in general, “then you’ve won the day,” he added.

*Watch Mel Brooks win an Oscar in The Producers.

Blazing Saddles may the better choice though.

THERE WAS A BIG DEBATE AS TO WHETHER TO KEEP THE FOOT AXING SCENE IN THE MOVIE, AND IT COST THEM A DIRECTOR.

In the book, Annie chops off one of Paul’s feet with an axe. George Roy Hill—director of Butch Cassidy and the Sundance Kid, The Sting, and Slap Shot—agreed to direct Misery, then quickly changed his mind once he realized he couldn’t handle the lopping scene, which Goldman insisted be left in. This led Reiner to just direct it himself. It also may have influenced him to change the script for Annie to “just” break Paul’s ankles. Goldman later admitted Reiner was right.

BATES WASN’T HAPPY THAT THE SCENE WAS CHANGED.

Bates was initially disappointed that the axe scene was changed to the sledgehammer.

*Enjoy Kathy Bates’ coconut cream pie while watching her win an Oscar in Misery. Wash it down with Elon Musk Tequila – Teslaquila. If you drink too much, have your car drive you home.

Next time you find yourself at a party in Silicon Valley, in the throes of a thoroughly dull conversation about self-driving cars, feel free to mention Teslaquila — a delightful new social lubricant from the very expensive brain of Elon Musk.