Look for the * to receive today’s advice. 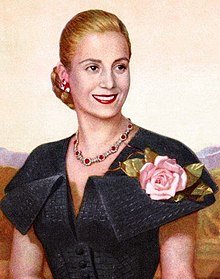 Evita took this principle completely to heart. She knew that she represented the idea of the poor country girl becoming a star, so she made sure she dressed the part. When she first became Argentina’s First Lady, she wore wild, dramatic outfits to “put on a show.” Later in her career, she adopted Paris designer fashion and wore more practical, but still very elegant, outfits. She was one of the first women in Argentina to sometimes wear pants instead of a skirt. By doing so, she promoted the message that women are equal to men and can do whatever men did. This was a very radical concept in the 1930’s!

Did Evita die as the result of sinister brain surgery? One neuroscientist believes so

Jaye suggests that men spend the most money on shoes, belts and a watch because that’s what most people pay attention to. “Men in particular always take notice of other men’s watches in the boardroom,” she says.

Women, on the other hand, should invest in quality shoes and a nice handbag.

She adds that these smaller items can really pull a look together and can be worn for years because they are less based on fashion trends.

*Remember that appearance does matter. Take this to heart today and tighten up your wardrobe so you are dressing for success and sending the right message to those who see you.

Smith’s wife Elizabeth recently tweeted a couple of pictures of Smith’s workouts while in Hawaii. They don’t look like much fun. In one, Smith is carrying a large rock while walking on the bottom of the ocean.

Many things will be written about the greatness of this brilliant journalist in the days ahead, and many people knew him far better than I. But I hope amid all the political and journalistic wisdom, people will remember that Tim Russert was a man raised and steeped in faith — a faith that focused on service, a faith that is confident in God’s plan, and a faith dedicated to the love of peace and the work of justice.

*Have a faith that focuses on service, a faith that is confident in God’s plan, and a faith dedicated to the love of peace and the work of justice

After the Steelers cut Unitas, things must have looked pretty grim for him. He had a wife and children, and he needed to make some cash to support them. Unitas took construction and steel work jobs around Pittsburgh to make ends meet while also playing QB for a local semipro team, the Bloomfield Rams. The Rams were quite literally a sandlot team; they had to sprinkle oil or water on the field to keep it from getting too dusty since there was no grass. For the whopping paycheck of $3 per game

*It’s hard to believe this tale about one of the greatest players in NFL history. This could be you – things might be looking pretty grim for you right now. You may have to work at a job that one day you will laugh at. Keep pushing and striving for your dreams and you may end up in the Hall of Fame.

Pyotr Ilyich Tchaikovsky is widely considered the most popular Russian composer in history. His work includes the The Sleeping Beauty and The Nutcracker.

Cooper judged people on their character, not their politics. There’s a lesson there for all of us.