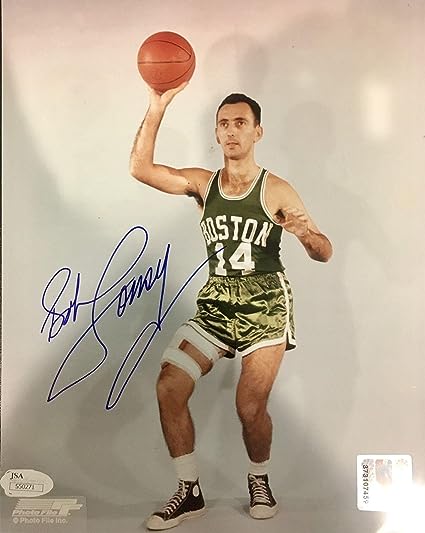 Once a game is over, no matter how high the victory or how galling a defeat, Cousy usually manages to relapse almost instantly into an honest-to-goodness calm, much to the mystification of his teammates, who generally require a much longer period to settle down. It takes Cousy a half hour, nonetheless, before he has the game completely digested. A liveliness then comes back to his eyes, the contours of his face become rounder, and there is a merriment in his remarks and a ready enjoyment of other people.

*No matter what happens today, be like Bob Cousy and relapse into an honest-to-goodness calm at the end of today.

One of my toughest workouts would be on the track and it’s called a “400 Breakdown.” That’s where you run 300 meters, rest for 30 seconds, and then run 100 while you still have that lactic acid buildup. So you have two sets of those and then after that you do mat runs. Basically, you stand on a high-jump mat and do four sets of high knees for 30 seconds, and then as soon as you get off there you have to run 200 meters on the track with all that lactic acid still in your legs. You don’t look forward to doing it, but when you do it you really see the benefits.

*Get to a high school track and try this 400 Breakdown workout. Good luck.

While reading the Bible one day, Blow says, “I got so into it that I couldn’t put it down, and I got to the last book in the Bible, Revelations, and it’s sort of like a prophecy. And I said I’d better get my act together before all this stuff starts to happen.”

*Read the Bible today, especially Revelations. Get your act together! Play basketball afterwards.

When it came to selecting a financial advisor I was not surprised to learn that all of stars I spoke with picked an advisor from their inner circle. Some like Deion Sanders have had the same advisor since he started in the big leagues.

*If you haven’t done so yet, get a Primetime financial planner today.

Who you choose to spend your life with is one of the most important decisions you’ll ever make: I’m not sure if the chicken or the egg came first when it comes to how Whitney and Bobby ruined each other’s lives.

*Listen to Whitney with the person that you want to spend the rest of your life with. You will always love them!

According to a survey conducted by London-based think-tank the Legatum Institute, who considered 104 factors before coming to the conclusion that New Zealand should be crowned the top country on its Prosperity Index.

The United States failed to feature in the top 25

*Enjoy this kiwi bread in honor of the former Prime Minister of New Zealand. Think about moving there.