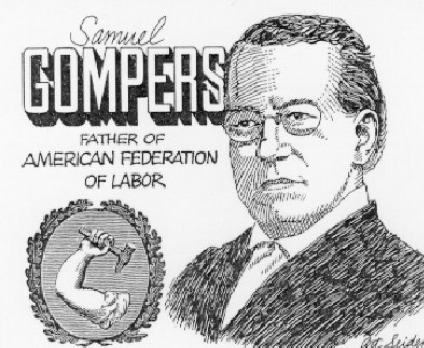 When political action was necessary, as Gompers increasingly came to believe in his later years, he urged labor to follow a course of “political non partisanship.”

Gompers — rated the greatest labor leader in American history by the presidents of the nation’s leading unions — believed that government activism was harmful to the working man. In 1915 he wrote, “Doing for people what they can and ought to do for themselves is a dangerous experiment. In the last analysis the welfare of the workers depends upon their own private initiative.” He applied that belief consistently to issue after issue.

Gompers believed that “social insurance cannot remove or prevent poverty.” Moreover, he argued that welfare is “undemocratic” because it tends “to fix the citizens of the country into two classes, and a long established system would tend to make these classes rigid.”

*You would think that the greatest labor leader in American history would have nothing but liberal thoughts. Gompers is an interesting mix of fighting for the rights of labor while being against welfare programs. This of course ties into his political non partisanship and could be a lesson for today’s politicians to not choose party over what is best for the country.

What’s the one scene that kept you up at night, knowing that you’d have to do it?

PIKE:  I always get worried about anything physical, like the action sequences.  Neil Patrick Harris and I had to do a violent scene.  If you’re going to do something like that, you have to do it with a certain degree of accuracy.  I had no idea how much force you needed to slice someone’s throat.  I actually went to a butcher and asked them if they wouldn’t mind me just using a box cutter on a pig carcass, just to understand what it would be like.  They let me do it, so anyone buying meat that day would have seen me behind the counter, with serious intent, finding out the mechanics of doing that.

Lawson had Pike lifting the heaviest weights possible. The workout was a basic weight lifting regime: squats, deadlifts, lunges, curls and other simple moves — but Pike was maxing out (that’s lifting as much as is physically possible for you) in eight repetitions. That built a base of muscle that later became the reason for Pike’s incredible definition in the film’s ending scenes.

*Max out on squats, deadlifts, lunges, and curls. Record what your max is on these lifts and look for improvement later this year, and stay away from any pork today. Watch Gone Girl for inspiration.

Although he had not been particularly religious as a child and young man, Chivington found himself drawn toward Methodism when he was in his early twenties. He was ordained in 1844 and soon began his long career as a minister.

Most of the warriors were out hunting when Chivington’s men arrived.  The Federals massacred the villagers, killing roughly 100 women and children before returning to Denver to display body parts and other gruesome trophies in local saloons and theaters.  Chivington and his men were subject to an official investigation but never brought up on charges for their actions.

*John Chivington chose his commitment to the US Military and the extermination of Native Americans over the morality of killing women and children. Even as a Methodist minister, he chose country over God. Take today to think about the choices you make each day that put your relationship with God secondary.

Rooney suffered for 40 years without an NFL championship, but when the Steelers won four Super Bowls in the 1970s and were acclaimed the greatest professional football team to that time, sports columnists nationwide said Rooney’s good fortune was proof that nice guys don’t always finish last.

Rooney never held a “regular” job in his life, except for a half day. He worked one morning in a steel mill, then quit. “I never even went back for my paycheck,” he later recalled.

Many believe that the $2,500 he used to buy the team came from his wagering, but he claimed he honestly couldn’t remember if that was true.

Other stories of Rooney’s generosity are legendary. He donated large sums to numerous charities. According to one story, a priest came and asked Rooney for money to help start a Catholic orphanage. Rooney peeled off $10,000 and handed it to the priest, who asked, “Are these ill-gotten gains?”

“Why no, father, I won that money at the race track,” Rooney said.

“In those days, nobody got wealthy in sports. You had two thrills. One came Sunday, trying to win the game. The next came Monday, trying to make the payroll,” he often said.

*Never holding a “regular” job is what 365DOLF is all about. Find your passion like Art Rooney, and become legendary at it. Go Steelers!

Wolfgang Amadeus Mozart: a genius composer and his time

Innumerous Mozart biographies focus on the life and work of Mozart. The first were written just a few years after his death and the last one has probably not yet been written. The fascination surrounding this exceptional musical genius is still alive today. This is the driving force behind mozart.com, the first comprehensive Mozart biography for modern, internet-savvy readers of the 21st century.

The phrase “the Mozart effect” was coined in 1991, but it is a study described two years later in the journal Nature that sparked real media and public interest about the idea that listening to classical music somehow improves the brain. It is one of those ideas that feels plausible. Mozart was undoubtedly a genius himself, his music is complex and there is a hope that if we listen to enough of it, a little of that intelligence might rub off on us.

*Listen to Mozart and let his intelligence rub off on you.

There are few books more perfect for a tea party theme than Alice, whose heroine, Carroll tells, us, “always took a great interest in questions of eating and drinking”. The book is stuffed with food, from the the Queen of Heart’s stolen jam tarts to the mushroom Alice nibbles to change size, from which you can take inspiration. Not to mention the Mad Hatter’s tea party (though maybe don’t put a dormouse in the teapot).

RECIPES FOR AN ALICE IN WONDERLAND TEA PARTY

*Have friends over for an Alice in Wonderland Tea Party. If you’re caught up on your reading, start reading the book by Lewis Carroll today.